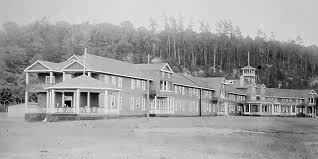 Jennifer of Team Grainger recently enjoyed Nancy Tapley’s evening entitled “The Night the WaWa Burned,” hosted by the Baysville Public Library. Nancy’s talk was very well attended with additional chairs brought in to try to accommodate the terrific response. In the end, listeners were shoulder to shoulder, with only standing room left.

The Wawa, built in 1908, was the premier resort hotel in Lake of Bays, Muskoka. The WaWa, WaWa a native Canadian word meaning “Wild Goose,” was located on Norway Point, which was home to a very distinctive single pine left after the lands had been cleared. Featuring a sandy beach, western exposure, and a dance pavilion, the WaWa offered plenty of activities to keep guests busy from morning to night. The original main building had capacity for 150 people and featured electric lights, hot & cold running water and an elevator, a very impressive and modern build for the time. Demand was high and by 1913 the building was expanded to accommodate 300. As seen in the above picture, the WaWa consisted of a 3 story Centre block was flanked by 2, 2 story wings. The interior featured beautiful tongue and grove pine brought from Georgia, and wonderful wicker furniture.

On the evening of August 18, 1923 for reasons never quite determined, the WaWa burned to the ground in 15 minutes leaving 9 people dead. The glow of the flames could be seen for miles around the lake, as it projected an eerie coloured light into the night sky. Baysville it has been said, was lit up so bright you could pick up a pin off the road.
The legacy of the WaWa held good and bad for Muskoka. Once a popular tourist destination, the lack of preparedness combined with the build of the WaWa left people uncomfortable with this traditional style of Muskoka get aways. It did however, spurn the build of Bigwin Inn touted as fireproof as it was built primarily of concrete and rock. Further the ensuing fire investigations produced numerous recommendations and changes to the way buildings were built, as well as an increased emphasis on fire safety standards.
Team Grainger thanks both Nancy Tapley and the Baysville Library for a wonderful and informative evening which was enjoyed by all.