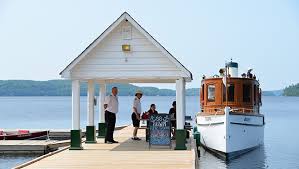 Kick off this summer with a cruise on the SS Bigwin! Made primarily of Mahogany, Oak, Fir and Poplar, the SS Bigwin can hold up to 32 passengers and 3 crew. The boat is 66’ in length, 6’ deep, with an 11’8” beam, weighing in at 25 tons. Powered by an electric motor, the batteries allow for approximately 6 hours of cruise time.
The SS Bigwin dates back to the early 1900’s when people travelled to the Muskoka Lakes aboard majestic steamships. Previously used on Lake Muskoka, in approximately 1925 Mr. Shaw purchased the Bigwin and moved it to Lake of Bays. With the decline of the resort industry, the SS Bigwin feel into disrepair resting partially submerged on the bottom of its slip at Bigwin Island. In 1991 the SS Bigwin was purchased after considerable fundraising efforts and floated to South Portage where the restoration began in 2002. In 2004 it was moved to Dorset where it now permanently docks. Today, the SS Bigwin is the last remaining ship of its fleet. To see the Bigwin cruising Lake of Bays click here.
The SS Bigwin officially launched for the public in July 2013, with its first full season being 2014.
This Saturday, June 15, 2019 H.O.L.D Community Group and SS Bigwin are sponsoring free boat cruises from 10:00 – 2:00pm, every hour on the hour from the Dwight Dock. Don’t miss your chance to enjoy a trip on this piece of Lake of Bays history. Also at the Dwight Dock from 11- 2pm a FREE BBQ- Bring the whole family.